This is something I wrote for a health community I worked for. As I moderated the mental health communities there, I did an essay on Nijinsky, Le Sacre du Printemps, genius, madness, ballet, and the women in Paris in their beautiful opera combs who rioted on that famous night.

The Joffrey Ballet recreated Nijinsky’s original choreography to Sacre in 1987, and they put it on YouTube this year. Here are the links to the entire performance.

The 20th Century began a revolutionary change in the intellectual, decorative, and performance arts, as well as fashion, literature, and painting. The conformity and elegance of the Victorian period was giving way to movements such as Art Nouveau, where natural forms were being reworked and transformed into exquisite pieces of jewelry using new materials.

LC Tiffany was making leaded glass lamps into paintings of the natural world. Influenced by Japanese art and Symbolism, Lalique was elongating bird wings on hair combs to reinterpret how we understood ourselves. In each field, there were leaders, geniuses who saw the world as it was and imagined something radically different.

In ballet, there was Nijinsky. Lover to Diaghilev, who founded the ground-breaking Ballet Russes, Vaslav Nijinsky choreographed The Rite of Spring, Le Sacre du Printemps, Stravinsky’s visionary score about a pagan sacrifice in prehistoric Russia. It premiered May 29, 1913 in Paris.

In the Paris of 1913, ballerinas wore exquisite white costumes, danced in pink slippers with arched toes in perfect form to story plots, which always paid homage to princes and kings. Male partners lifted ballerinas to make them look as if they were floating on air, as one leg brushed the floor so softly as to make the audience gasp. Women were swans, fairies, maidens, sylphs, and princesses, who sacrificed their lives to forgive men’s amoral decisions (Giselle) or stupidity (Swan Lake). European culture was celebrated as having exquisite taste and gracefulness in its ultimate superiority. 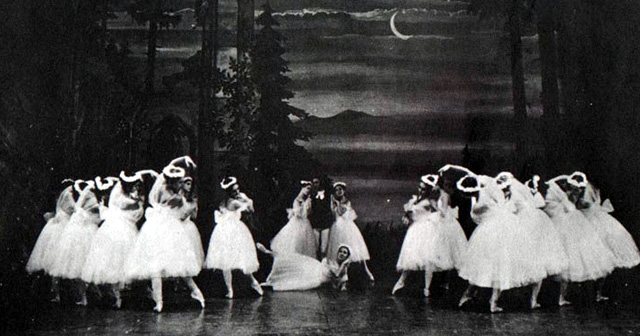 Les Sylphides as Nijinsky danced it in 1909

Into this world came Nijinsky and Sacre.

The dancer’s costumes were loose, unsophisticated, and unbecoming. Their toes were pointed in. Maidens had white makeup all over their faces, and men did stomping dances. The movements were spastic, clumsy, off-center, pack-like and raw. The society portrayed was pagan, with an old sage who signals it’s time to make a sacrifice. But there was no king, no Christian God, no church, no army, no awareness that people had to pay homage to anything but their adoration of the Earth.

In perhaps the most complex score ever to be written for ballet, Nijinsky chose simple, unsophisticated but brilliant movements, one to every beat, 2 beats, or 4 beats, making sure that dancers only expressed melody. He let Stravinsky’s radical ideas, dual tonality and dual rhythms, live by themselves. He also made his dancers go into the floor, a controversial innovation that Martha Graham also championed when she came on the scene in 1926.

At the end of Nijinsky’s Sacre, the girl being sacrificed dances with the spastic, shivering fear of a caged animal who knows she’s going to be killed but cannot escape. She is surrounded by pagans wearing bear skins, complete with the head, and making the movements of horses. At the last trill, she’s ready. She lays down, and offers her body. Eight men pick her up, hold her on top of their hands, and she’s dead. 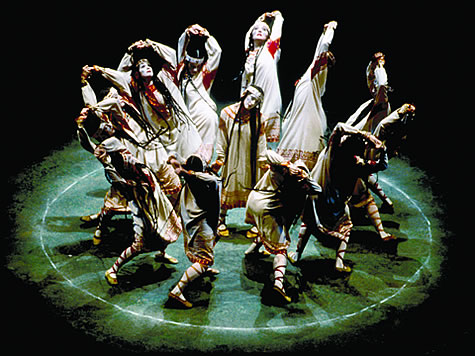 A sophisticated, beautifully dressed Parisian audience at the Théâtre de Champs-Elysées, with women who wore winged diamond tiaras, diamond opera combs, and chiffon gowns, had to see this savage portrayal done on white dancers. The audience had to contemplate that once European culture was primitive, that their sense of heirarchy, cultural superiority, and self-worship was irrelevant, at a Ballet Russes performance, at a time when Faberge was still making Easter Eggs for Czar Nicholas II.

Nijinsky was defended by Rodin, Odilon Redon, and Proust, but it was not enough. He was vilified. His heart could not bear the world’s scorn. He had a nervous breakdown in 1919, was diagnosed with schizophrenia, and lived in and out of hospitals and asylums for the rest of his life. A countess he married, and of whom Diaghilev was extremely jealous, devoted her life completely to his care, and Nijinsky died in a London clinic in 1950. 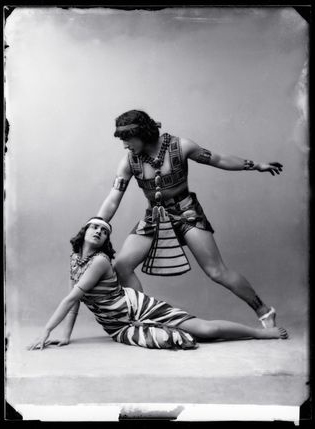 Opinions vary as to whether his wife’s plebian nature or the world’s rejection of his vision triggered Nijinsky’s schizophrenia, but to me it doesn’t matter.

An artist takes the world with him. LC Tiffany saw a Victorian oil lamp and invented favrile glass. He saw his father’s diamond opera combs and envisioned two dragonflies pollenating a dandelion. The world followed Tiffany.

Nijinsky danced in Mikhail Fokine’s Les Sylphides, which was premiered by his lover Diaghilev for the Ballet Russes on June 2, 1909. Four years later, he choreographed Sacre, and the world did not follow him. Nijinsky was 50 years ahead of his time.

What is schizophrenia? You hear voices. You see things that are bizarre to the world. Paranoid fantasies. Somatic delusions. Obscure and confused expressions. But in rare cases, may I be bold enough to suggest that the worst mental illness known to man can be triggered by a closed-minded world who breaks the heart of a genius?