This art nouveau piece was originally a dog collar plaque (do we love this?) but can also be worn as a barrette. It was made in 1902 by the House of Koch, founded in 1879 by Robert and Louis Koch in Germany. In 1883, Koch was bestowed with the title of ‘Jeweler of the court.’ Many works were made for European Royal families such as the Czar of Russia or the King of Italy.

Our dog collar / barrette shows a spring scene of birch trees, green grass with floral detail. The blue lake offsets the purple mountains in the distance, and the sky is opal. Everything but the opal sky was made in enamel, surrounded by silver-topped gold and diamonds. This is a masterpiece. Thankfully, the pin stems were added later. The estimated value is $150,000 – $200,000. It did not sell. 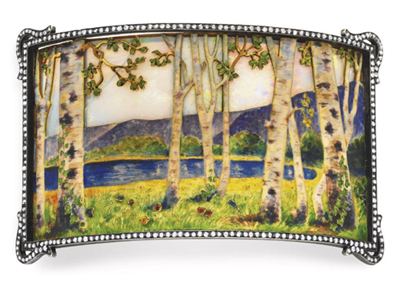