In 1644, the Northern Manchurians conquered China, defeating the ethnic Hans in the South. They named their dynasty Qing, meaning clear, as the Hans’ Ming Dynasty (1368 – 1644) ended. While the Manchurians integrated with the Chinese, many rebellions and tribal wars took place. In 1912, the Manchus lost power to the Republic of China.

Thank you to Jiarui Lu for sending in the correct scholarship. “Today, the Manchu, or Man Nation is one of 56 nations of China. The original place is northeast of China, and now most of “Man” people live in Liaoning province, Jilin province and Heilongjiang province of China.”

However, during the Qing Dynasty, the Manchu comb makers created outstanding three-dimensional hair ornaments with kingfisher feathers, as well as coral, amber, and jade. They were supposed to bring their royal wearers good luck.

Here are two examples. The first is from the Creative Museum’s Asian Collection. The second is mine. I got it on E-bay from a woman whose seaman father brought it home from China in the 1920’s. 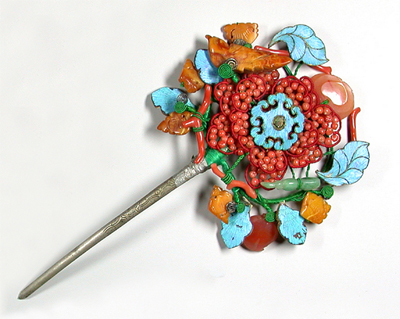 The stark contrast between what the Manchurians made for themselves and what they made for Victorian England reinforces China’s understanding of the West. I think they still understand us better than we will ever understand them. However, looking at these hair combs, I cannot help but ask, “Can reflection, caution, patience, and discipline supersede courage, freedom of thought, and innovation?”