What does an innovator do when his soul, land, and religion belong to a race who survived genocide? How does an artist feel when his genius compels him to consider all cultural ideas equally, even those of the countries responsible for the genocide?

Early in his career, Charles Loloma realized that many traditional Native American designs, such as the squash-blossom necklace, came from Spanish influence, so he reached outside the Hopi Nation. He was the first jeweler to combine Mediterranian salmon and oxblood coral, gem-quality Lone Mountain turquoise, ivory, gel sugulite, exotic woods, silver, and 14K gold into jewelry. His bracelets and necklaces sought to express the texture of Hopi land and water, as well as the sacred masks of Kachina dancers. The groundbreaking way in which Loloma combined ideas made new art, which allowed people to understand the Hopi ethos more powerfully.

Here is a bracelet of a kachina face, symbolically interpreted in 14K gold, ivory, coral, turquoise, and charoite. Price on request.

In 1941, Rene d’Harnoncourt included a mural by Loloma at the highly successful exhibition, “Indian Art of the United States,” at the Museum of Modern Art. However, in the 1950s, as Loloma’s artistic courage was redefining Native American art, breaking down regional barriers, and bringing Hopi artists out of isolation, an all-white consortium of hotel and restaurant owners called the Gallup Inter-Tribal Ceremonial rejected his work three times for not being “Indian enough.” In other words, Loloma didn’t make stereotypical pieces white business owners thought white tourists would buy.

He made only three hair ornaments in his career. One of them is on sale at the Indian River Gallery. It uses his mosaic motif and combines stones with ironwood and silver. Price: $22,000. The valuation is correct. You may examine other Loloma pieces at Christie’s. 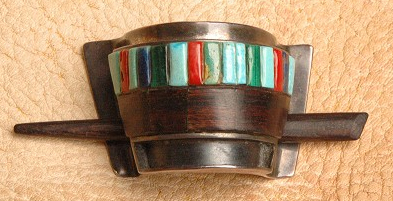 Charles Loloma was born near the village of Hotevilla on the Third Mesa of the Hopi Reservation on January 7, 1921. The reservation covers 2500 square miles of Northeastern Arizona and is made up of three “mesas,” flat table-top-like portions of land surrounded by cliffs. This terraced farmland is just beneath Hotevilla. 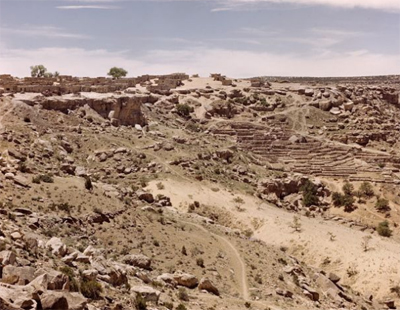 Loloma belonged to the Honani, the Badger phratry (fraternity) of the Hopi, which included many clans: Miunyan (porcupine), Wishoko (turkey-buzzard), Bull (butterfly), Buliso (evening primose), and Kachina (sacred dancer). He was also a snake priest, a revered status in Hopi culture. Every two years, snake priests dance to worship ancestors and bring rain. This is Loloma’s signature gold badger-claw ring coupled with a silver, coral, and silver snake pin.

He would travel from world to world, Paris one week, back on the reservation to perform religious duties the next. To explain the disparity, he said, “Two times I’ve been to Europe and Paris and have experienced what fine things are, but in order to create valid art, you have to be true to yourself and your heritage.

“I feel a strong kinship to stones, not just the precious and semi-precious stones I use in my jewelry, but the humble stones I pick up at random while on a hike through the hills or a walk along the beach. I feel the stone and think, not to conquer it, but to help it express itself” 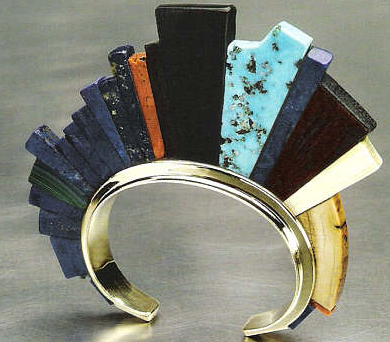 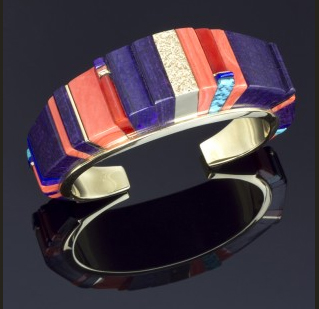 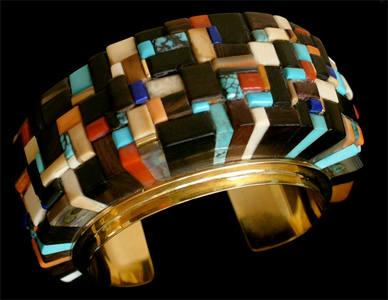 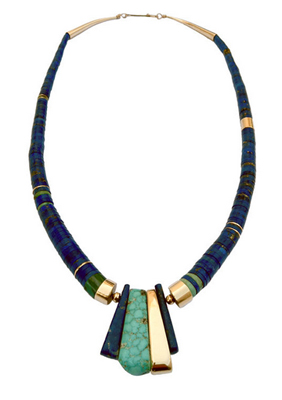 “I wish to create a relationship between the earth and myself,” Loloma says. “Sometimes we do not realize what we are kicking over.” He selects a piece of rock from the red ground. “I want to make the soul come out.” 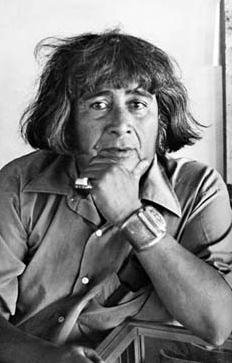