This is an important Cartier piece because its design is unique. Made in the 1930s, two posies of leaves, ribbons, and detachable flower heads are worn at each temple. The tiara is connected by a crescent of stones. On top is a panache motif of flowers, ribbons and scrolls. The old European-cut diamonds weigh approximately 175.00 carats. Cartier signed it and made it in London. Its estimated value is $250,000. 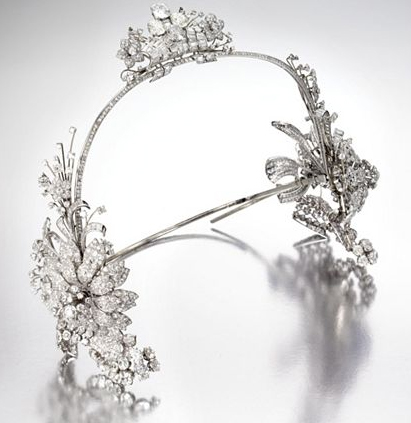 by the Creative Museum: From the Fourteenth Century, Dieppe sailors docked their boats on the coast of Guinea to collect ivory. Instead of selling their precious raw material to Paris workshops, they learned to carve great works of art themselves and kept the profit. The bindweed flowers carved onto this ivory diadem are hinged to…

Topped by a pear-shaped aquamarine, this tiara was owned by Princess Olga Valerianovna Paley. She was born Olga Karnovitsch on Dec. 2, 1865, married Erich Gerhard von Pistohlkors in 1884, had an affair with Grand Duke Paul Alexandrovich of Russia, married him without the Tsar’s approval, but then got his blessing and became a Princess….

Recently, some of us saw a gorgeous ivory comb go on Ruby Lane for $60. It was sold to neatstuffdave, who put it on ebay. I wrote to the original dealer in horror, and told her I thought it was a $600 comb. Dave thought it was worth about $200. It sold to jcollect (a…

This gilt brass comb has a hinged decorative heading composed of pink, yellow and white golds and set with small garnets, emeralds and turquoises. The intricate crafting of the heading depicts leaves and flowers springing from two vases, placed on either side of a framed central malachite cabochon. The backward leaning teeth allow a tiara…

Sotheby’s is having a sale of important jewels, and there are no formal combs or tiaras.But then I started looking at what they had, and thinking about Christian Lacroix and how he just threw hair fashion up in the air, saw what came down, and had the courage to create something new. I thought there…

On November 1, 1932, Coco Chanel exhibited her first collection of fine jewelry in her Paris apartment. Two offer her most enduring innovations were putting diamonds in invisible settings you could seem their brilliance without distraction, and the Collier Comète. The necklace was collar made to imitate fabric. The jewelers spent 9 months designing spring…