Amidst the cacophony of egos, E-bay is a war game. To sell collectibles, you either have to organize in real life to limit supply, as in the paperweight market; throw a piece of junk on ebay with the goal of attracting a private buyer, as in the Tiffany Studios market; but sometimes the collector wins the war because the seller is blindingly stupid. 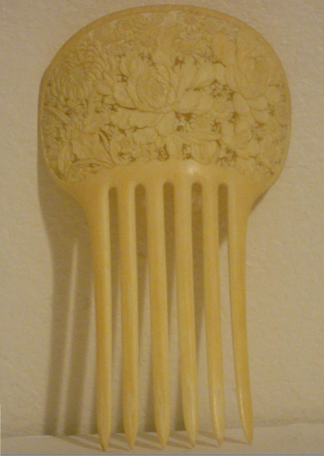 I couldn’t believe it. For four days I had a kill snipe bid on this. I knew the people who noticed it would behave like stealth tigers looking to take advantage of the seller’s ignorance. I also knew no one who noticed would bid to draw attention to the comb, thereby jacking up the price. I deleted my snipe bid because I thought “What are you doing? You can’t buy combs now.” I watched.

A comb I’d value at around $300 because there was a slight discoloration to the ivory in the back, invisible to the front, went for $39.99.

Even if the seller did not know the detailed floral decoration was one of the most popular patterns in Chinese ivory export combs, she should have seen the individuality of the discoloration on the back and known the comb was not plastic.

There were only two bidders, feedback scores of 2078 and 3309, respectively. That tells you a lot about their knowledge. The comb was won by the Creative Museum. I am happy about this. It was a brilliant buy.

At the moment, sellers on Ruby Lane are trying to sell their combs for retail prices on E-bay. The listings will not succeed because the main product of E-bay is the war game of egos.

8 thoughts on “The Bargain”