Topped by a pear-shaped aquamarine, this tiara was owned by Princess Olga Valerianovna Paley. She was born Olga Karnovitsch on Dec. 2, 1865, married Erich Gerhard von Pistohlkors in 1884, had an affair with Grand Duke Paul Alexandrovich of Russia, married him without the Tsar’s approval, but then got his blessing and became a Princess. After her husband and son were killed by the Bolsheviks in 1920, she fled to Finland with her two daughters. She died in Paris on November 2, 1929. Being a woman, no matter what happened to her, she kept the tiara. It is signed Cartier Paris, Londres, New York, was made c. 1912, and sold for $76,000 at Sotheby’s on May 12, 2009. 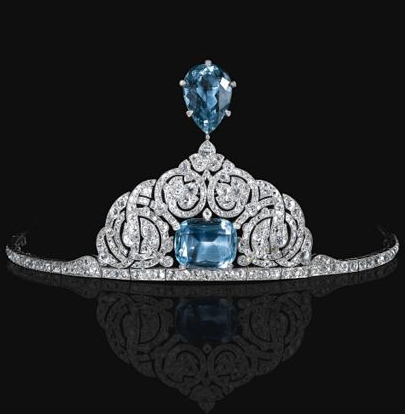