Museums are so annoying when they do not allow people to take pictures (without a flash) of exhibition items. I remember going to a diamond exhibit in Houston and seeing a few combs, but forgot I had my cell phone camera. *rolls eyes up to God*

However, on a trip to Oslo, one of the founders of the Creative Museum did remember he had a cell phone camera. :-) Inauspiciously disguised in a Dick Tracy hat, trench coat and dark glasses, he took a picture. Now we can see the Danish “Skonvirke” combs Oslo curators chose for the exhibit. :-) Skonvirke is the Danish version of Art Nouveau.

I like the coral-cabachon comb, but the Danish collection of the Creative Museum is better and much more extensive than what was shown in Oslo. Here are two examples.

This tortoiseshell and silver comb in its original box is attributed to Thorvald Bindesbøll. Provenance: “The design of a similar comb can be seen page 68, in the book Thorvald Bindesbøll og sølvsmedene, published by the Museet på Koldinghus.” 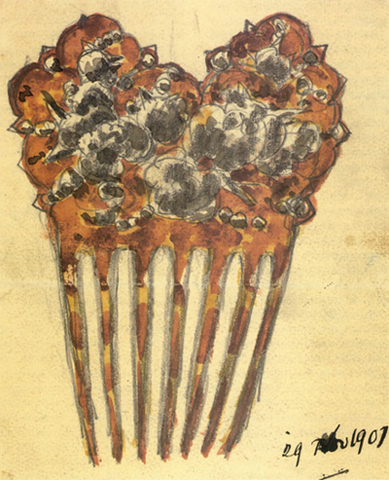 A tortoiseshell comb with a coral cabachon very similar to Georg Jensen.