Your spirit holds a voice from the past. Thank you for the miracle.

The man who bought your great great grandfather’s whale bone comb is Kajetan Fiedorowicz — pioneer in the antiquities world, professional photographer, and author on this blog. Serendipity plays creative games with chance, doesn’t it?

Your note brought us all joyous surprise. He sent me another photo of Mr. Tamatea’s work to put on the blog as a present for you.

Have you ever seen this one? In it, your great great grandfather gave this Heru two different colored paua-shell eyes, one dark – one light, clearly symbolizing the sun and the moon. I hope you enjoyed discovering us, as much as we were thrilled to hear from you. 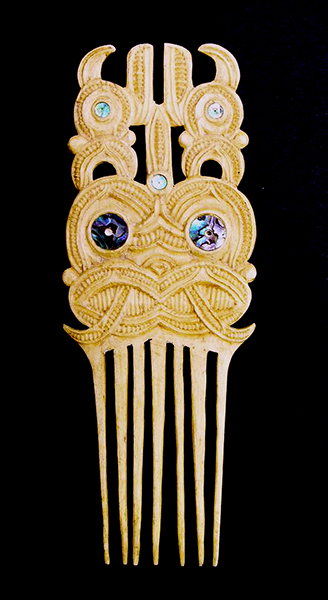 Kajetan also gave me a link to a Tamatea comb, which resides in the Maori section of the TeKakano Pacific Information Centre in the Auckland Museum. The listing says, “Source: Captain Gilbert Mair. Acquisition Date: 1890.”

In 1840, the year Queen Victoria married Prince Albert, New Zealand became part of the British Empire. Maori chiefs signed the Treaty of Waitangi. European settlers imposed their own economic and legal systems on the Maori, took most of the land, and left them impoverished. Seeing his genius in canoe carving, I have to wonder how much Captain Mair paid him.

I smell a rat, but have no original documents to prove it. However, I can say…

This priceless masterpiece in the Auckland Museum is a Tamatea, whose name is not listed on the information card, so I’m adding it. 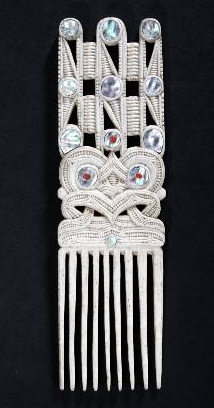 and from the archives of Kajetan Fiedorowicz:
The Collection of the Tepapa Government in New Zealand
Museum of Wellington & Sea

3 thoughts on “To the great great grandaughter of Patoromu Tamatea: Dear Lily,”