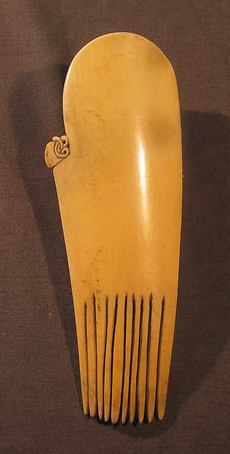 Patoromu Tamatea was of the Ngati Tamateautahi, a sub-tribe of Ngati Pikia. He carved canoes. When that work ceased in 1864, he was involved in settling a dispute over pigs. In later life, he started carving wood items, including combs, for British Captain Gilbert Mair. Many of his carved figures are now in the Auckland…

Your spirit holds a voice from the past. Thank you for the miracle. The man who bought your great great grandfather’s whale bone comb is Kajetan Fiedorowicz — pioneer in the antiquities world, professional photographer, and author on this blog. Serendipity plays creative games with chance, doesn’t it? Your note brought us all joyous surprise….

I would like to feature four museum combs today. The first comes from the Egyptian Museum in Cairo. It belonged to the King Wadj, whose name means serpent. His tomb was found near the ancient city of Abydos. He was the third King of the First Egyptian Dynasty and ruled c. 2920 BC. In the…