This ivory comb was made in North India, as the Mughal Empire reached the height of power in the 17th and 18th Centuries. The dynasty was founded in 1526 by Persian Sunni Muslims of Turkish-Mongol descent, hence the name, Mughal. The empire included Iran, Afghanistan, Uzbekistan, Pakistan, and North India, among other lands. Condition: Perfect. Sale price: 15,000 GBP on May 31, 2011. 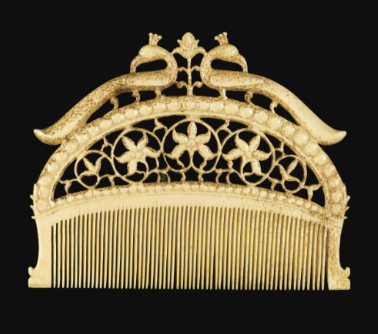 The Mughal Empire (The New Cambridge History of India)