This parure highlights hand-inlaid gold and silver on tortoiseshell. Each cameo has a complex floral pattern in a geometric frame. The balls on top of the comb show the influence of Napoleon’s Josephine. The cultural exchange between Russia and France occurred during the Napoleonic Wars. Educated Russians traveled to Europe and wanted to implement liberal political ideas in Russia. When Napoleon was defeated in 1815, Tzar Alexander I bought Josephine’s art collection. Indeed, the language of the Russian court was French. Nicholas I took over in 1825. The parure resides in the Hermitage, c. 1830 – 1850. 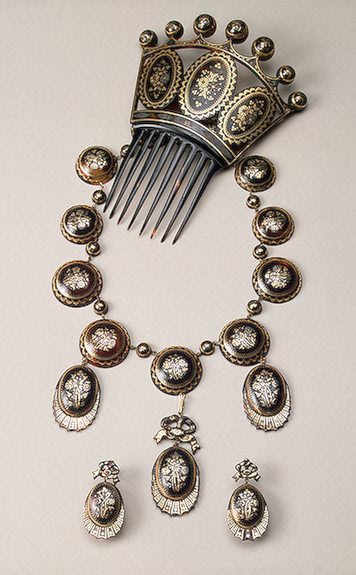