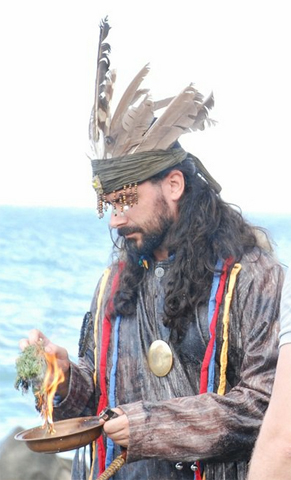 Here, I am performing the ritual Sacrament of the Black Sea, or Karadenizde Saman Ayini.

It is important to me that people know Siberian Shamanism is directly linked to the real Turkish culture, in which we are called Kham Kishi. It means protector of the tribe or clan. We have a lot on our to-do list, actually.

Before I get to that, I would like to thank you for asking a very good question, “What it is like to be a Siberian Shaman?” You see every book about shamans or shamanism is written from the point of view of the author, not the subject himself. There is no traditional shaman, who has ever described his inner self. There is no example of what goes on within the shaman when he enters a trance situation or when he performs a healing ritual. It is far more than words can describe.

To be a Kham Kishi is the biggest responsibility that the tribe could give to someone. Can you imagine being the only one who can cure people from their death beds, and it depends on your power of faith to achieve that? And the person’s loved ones are standing outside of the house, praying silently, so as not to be seperate from their relative so soon, when they are still madly in love?

Sometimes we have to decide that death is the best thing a sick person can experience. Of course, we are not the ones who decide his fate, but we are the ones who make it happen. Death is not something to fear. No one fears death. People are afraid of being alone at the other side. That is why they cannot leave directly after death. They hang around, so to speak, because they do not want to believe they are gone.

So we have to explain to the dead one what happens from now on — that it has 42 days to visit every single memory and experience before he or she has to leave totally. The spirit must make peace with everything in their life-path. As they are able to walk through dimensions, they go from their day of birth, until the day they die, and make peace with every trauma they ever had. Otherwise, they would be too heavy for the other side.

They have to lighten up or enlighten themselves. This ritual is parted in two. The first part takes place on the 7th day of death. The second one happens after 42 days after that. If they still do not go, they start to manifest themselves as a negative influence on the family, and later on the Earth. At that point we come in and banish the spirit to another place where its radiating energy cannot harm anyone. This Death Ritual, we call Ot Kypsyk.

Besides rituals for death, we have them for the four seasons, healing, and cleaning.

All of them are performed with our Dungur (shaman drum). The simple reason for that is vibration. Everything in nature has its own vibration or resonance. The Dungur helps us to find the correct rhythm of the spiritual plane where healing happens for that specific subject or object. Every organ in our body has its own vibration. When is it out of tune, sickness will occur. Then we come in and drum the correct vibration, so that the organ finds its resonance with its origin. 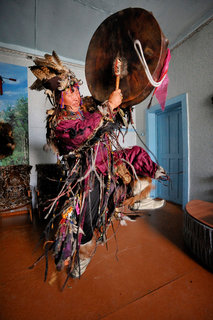 Besides the drum, our tools include a whip, juniper, bells and Eeren (supporting spirit), and tos karak (a nine-eyed spoon).

I am a Wolf Shaman of the Adyg Eeren Religous Center in Kyzyl, Tuva Republic. Our Chief is Kara-ool Dopchun-ool Tulush. He is well known in Siberia and a powerful shaman. 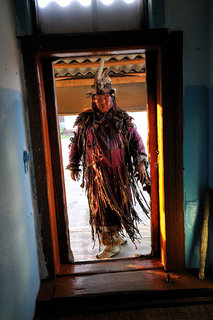 One of the most celebrated festivals is Shagaa (New Year). It is the day, when Sook-İrey turns back into the depth of the mountain. That happens in the middle of February. You can say, that day is the last, hardest, and coldest day in winter. From the next day on, eveything starts to heat up. People celebrate with happyness because we believe that if our seed for New Year is full of sorrow and sadness, the gain of it will be the same but bigger. So we live with the philosophy, “You get, what you seed…”