Isidor Kaufmann was born in Arad, Hungary (now Romania), in 1853. Leaving for Vienna to study art in 1876, his assimilated Jewish clients coveted their commissioned portraits. Viennese Jews looked down upon their fiercely religious, backwater brethren in the shtetls, so it is ironic that Kaufmann is best known for his realistic portraits of shtetl rabbis in Poland, Russia, and Hungary c. 1890. Their stony gazes reveal the fight to keep their dying culture alive. 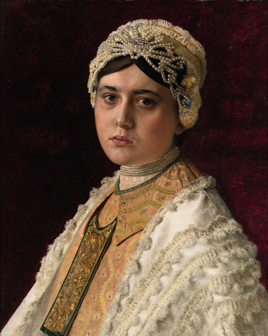 This is the second one. Look at her kipah, or wedding hat. 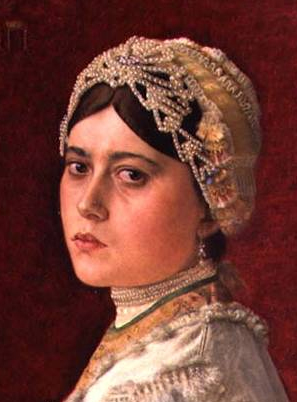 Attached to the masterfully ornate fabric is a hand-made seed-pearl tiara. There is a circular center, above which is a spray of seed pearls, shaped into individual hearts, and attached to the top. To the side, a chain of hearts reaches the front-sides to hold the kipah in place. One of the chains of pearls becomes a border around the bottom. Hannah’s parure is completed by pearl earrings and a five-tiered seed-pearl necklace.

Even though he probably painted his daughter in Vienna, her gaze is as fierce as the shtetl rabbis’. Perhaps she knew she was defending a culture, which would be threatened by extinction, too.

Isidor Kaufmann art prints: Portrait of a Rabbi and Girl with Flowers in her Hair