I am delighted to present this post by Mary Bachman, president of the Antique Comb Collectors Club. She wrote one of the definitive books on European combs called, “A Collectors Guide To Hair Combs.” I’d recommend buying this book because she has a beautiful collection, and it is also a price guide.

Mary wanted to share one of her Auguste Bonaz combs with us. She writes, “Auguste Bonaz was a designer of hair ornaments during the early 20th Century. His designs are very popular with collectors. His company was located in Oyonnax in Eastern France where he designed for leading jewelry makers. After World War I his business expanded and the demand for his combs continued to grow. Even though ladies were bobbing their hair, his combs continued to be popular. His designs are varied and delightful. Bonaz died in 1922, but his wife carried on his business using only his original designs. His nephew managed the business until 1982 when it finally closed. (Reference: Jen Cruse article in the Antique Comb Collector, June 2000). 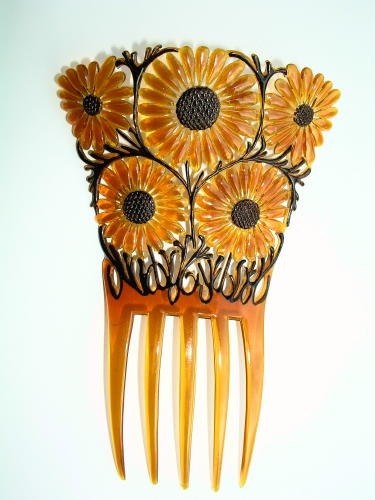