There have been a few beautiful things from ebay auctions, which are worth noting. 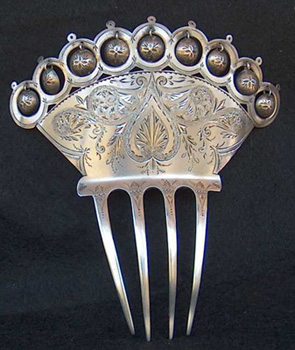 Pictured left: On October 9, 2006, a comb by French art nouveau jeweler Henri Hamm (1867-1961) sold in an ebay live auction for EUR800, approximately $1003.76. It is made of carved blonde horn with a gold-bordered opal, c. 1904. Pictured right: A Henri Hamm comb at the Tadema Gallery. It is also carved blonde horn, inlaid with gold, mounted with demantoid garnets, and sold for between 2,500 and 5,000 British Pounds Sterling.  Both are signed H. Hamm, but the person who bought the Hamm comb listed on ebay got a beautiful item for one-fifth the retail price. 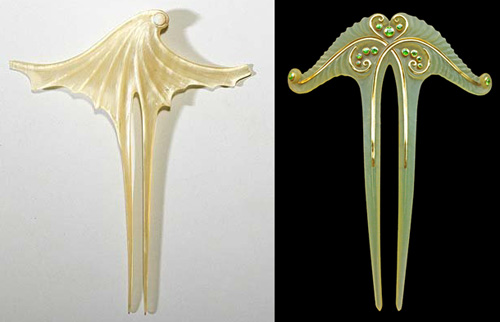 A blonde tortoiseshell hairpin with a 14K inlaid gold top, tied in a knot, c.1880, sold for $323 on October 1, 2006. The seller, bubbleking, lists it as being American in origin. Not sure why he thinks that, as most of the combs in this style are English, but maybe. :-)

I think every animal has appeared on a hair comb at one time or another. A friend of mine has an ivory rat comb! In what category should I show that? What about with a kanzashi bat? Ivory Comb, English. c. 1880. Tortoiseshell kanzashi, bat, c. 1880.

This agate, cameo, and gold tiara is part of a complete parure, c. 1840. The tiara has a graduated series of five pinkish brown and brownish gray agate cameos, each sculpted in high relief. They depict profiles of various figures. Cameos with different colored accessories are the most valued. These have pinkish brown agate accessories,…

The butterfly, the short-lived ethereal beauty of gardens and countryside, has been a favourite motif adorning hair jewellery for at least the past 250 years and particularly popular through the 19th and early 20th centuries. Its delicate form is found on combs and hairpins from many countries around the world, and even featured on the…

Here are my picks from around the web. This masterpiece was brought to my attention by The Creative Museum. Merci, Monsieur Touzinaud. The most magnificent cameos are those where the artist gives the natural coloration in the stone a purpose in his carved figure. In these stunning examples, the color defines flowers in the women’s…

From Michelle Rowan’s website, “Fine quality carved tortoiseshell comb, featuring bacchante heads in profile, circa 1880.The cameos are carved in high-relief and set to a background of floral motifs and stylised sea-creatures. The comb measures 13 cm by 13 cm [ 5 inches by 5 inches] and is in immaculate condition.” I’m basically so emotional…

This tiara was made by E. Wolff & Co. for Garrard, the crown jewelers since 1843. It was made c. 1889, shortly after the marriage of the 6th Duke of Portland. Ivy, formerly the Marchioness of Titchfield, became the Duchess of Portland when she married the 7th Duke. There is a miniature portrait of her…