As the Mexican Revolution brought social upheaval to the country from 1910 to 1921, Mexicans were struggling not only to bring economic justice to the poor, but to cast off a European cultural identity in favor of an indigenous one. They began to study pre-Columbian folk art, looking to treasures found in archeological ruins for inspiration.

A Tulane University architecture professor named William Spratling went to a sleepy silver-mining town called Taxco and wondered if he could bring it back to life by producing silver jewelry designed with a pre-Columbian aesthetic. His vision worked.

By 1940, he employed over 300 craftsmen, and mentored great silversmith-artists. Hundreds of tallers and artisans opened shops in Taxco to create beautiful silver jewelry. Like every other arts-and-crafts movement in the world, there were also hair combs. :-)

This extremely rare pair of Hubert Harmon Atomic Bomb hair ornaments, in brass, c. 1945, might have been made as a reaction to Hiroshima. They are on sale on Trocadero for $2800.

Matilde Poulat, whose designs are distinctly native, opened her shop in 1934. This comb has Aztec motifs, and is also listed on Trocadero, but you have to inquire for a price. 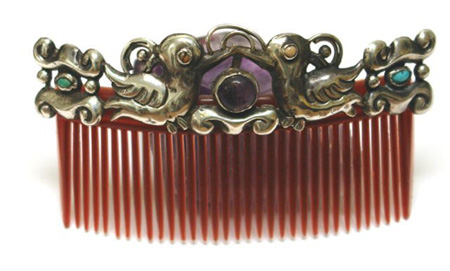 On May 20, this beautiful pair of sterling silver combs by Ana Brilanti went for $224.50 on ebay. She opened her shop, Victoria, in the 1940s and was one of Spratling’s proteges. She even designed a piece for First Lady Eleanor Roosevelt. 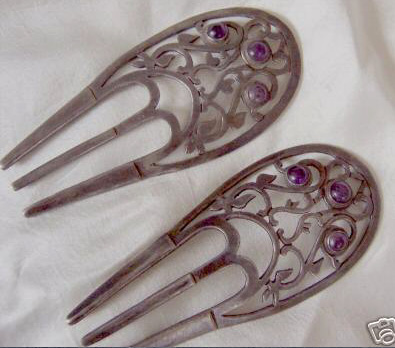