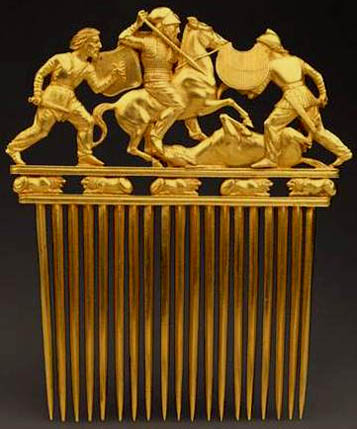 It belongs to the Hermitage Museum in St. Petersburg, Russia and usually resides in the Second Chamber of the Gold Room. It was found in 1913, when N. Veselovsky excavated the Solokha Barrow. Epic Scythian legend recounts the quarrel between three brothers seen as the founders of the Scythian tribe. The battle has been portrayed many times in different media.

Scholars feel the comb was created between the 5th and 4th Century BC, when the Scythian king was killed by his own brothers for his love of Greek culture. At some time in the first third of the 4th century BC, the comb was placed on the head of the victor, Octamasad, whose tomb was placed inside the grandiose 18 metre barrow earlier erected for his brother Orik. This tomb was robbed in Antiquity, but the comb survived.

What I find ironic is that combs are the territory of women, but this most famous one was about war and made for a man.