After the opening up of trade routes to Japan, Edo and Meiji combs were introduced at the Paris exhibition of 1867. They took the European art world by storm and began a craze in France called Japonisme . It is interesting to compare Lalique’s masterpiece Two Swallows with a Stalk of Oats c. 1906-1908, carved horn gold and diamonds, with a Meiji kanzashi of plover birds.

In Swallows, Lalique incorporates the art nouveau philosophy of Symbolism: one thing transforms into another. He elongates the swallows’ wings to engineer the tines of the comb. It’s a double entendre.

The Meiji ornament, which went on a kanzashi stick, shows the relationship of a mated couple of plover birds in a tree. The shell used had different colors, which adds shadow, but the perspective and theme are realistic, emotional, and stunningly carved. The French skewed nature to match the intellectual ideas all art forms were using in that time. 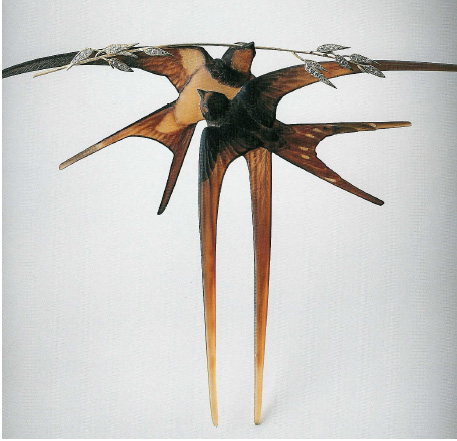 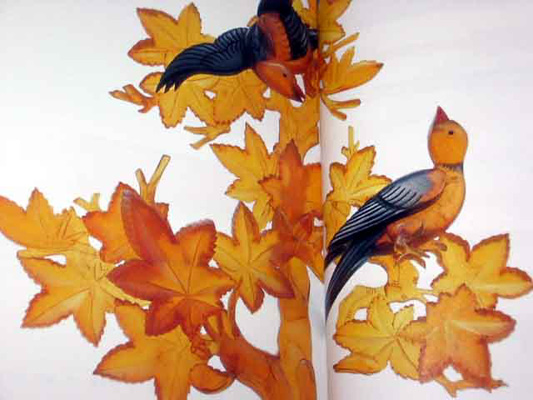 This is a modern replica of a Victorian tiara, made of 5 graduated diamond flowerheads, some have a 2- to 3-carat fancy vivid yellow diamond in the center and 2 or more carats of D flawless white diamonds, which make up the petals. There are also marquise-shaped yellow diamonds on the bandeau. It is part…

Mellerio dits Meller is the oldest family-owned jewelry company in Europe, spanning 14 generations. In 1515, the first Mr. Mellerio left Italy for Paris because he heard there was opportunity there. His family started the company in 1613. As Jean-Baptiste Mellerio was vending his wares in front of the Château de Versailles, he attracted the…

I’m not one of these buyers who thinks things over. If I fall in love, it’s immediate, and I buy the piece. I haven’t bought a hair comb in a long time, but this Auguste Bonaz had my name on it. By the shape of the comb itself, this is a 1940’s piece. Underneath the…

A beautiful Lalique comb with a gold top centered by a woman wearing a hat, surrounded by two birds. One bird head is outside the design. The other is hidden behind the design. The comb is made of horn. Listed for $3000, an offer of $2000 was accepted on March 21. The markings said Lalique…

A few months ago, this set of tortoiseshell hair pins with pearls and diamonds, priced at $1200, went unsold. I understand the jewelry was real, but the design is common. If you value just the pearls and those small diamonds, they don’t amount to very much. Neither do two small shell pins, not $1200 anyway….

The setting of gems is profound meditation. How can a tiara or crown give its wearer the verisimilitude of God on Earth? Rene Lalique couldn’t care less. He transformed the appearance of jewelry with new themes. Combining French Symbolist philosophy with ideas from Japanese art, he incorporated gem setting into raptors’ claws in this comb,…