The first two items for today are Chinese hair pins. The first is from my private collection and had been carved from one piece of tortoiseshell, the blonde part representing a bird. I believe the piece to be dated c. 1890. 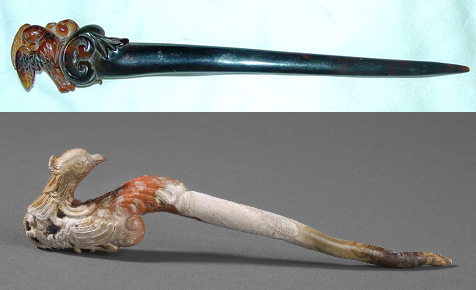 Our third item is an Indian ivory comb, made in Sri Lanka in the 18th Century. The woman is dancing to the music of panava instruments, perhaps drums and a flute, with parrots surrounding her. In Indian dancing, each pose conveys an emotional state during storytelling. Although the ivory is discolored, the carving is magnificent. These were luxury combs, which would be included in dowries. Both the phoenix Chinese hair pin and this Indian comb reside in the Philadelphia Museum of Art. 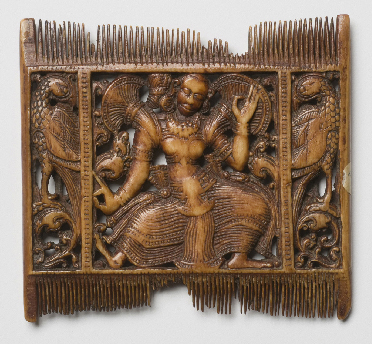 This Art Nouveau plique-á-jour enamel turquoise and diamond necklace and hair comb sold at Sothebys for $29,875 on Dec 10, 2002. The comb is a triangular cluster set with oval-shaped turquoise cabochons. These are the flowers coming out of translucent yellow-orange enamel buds, which are then surrounded by green plique-á-jour enamel leaves. The matching necklace…

This is something I wrote for a health community I worked for. As I moderated the mental health communities there, I did an essay on Nijinsky, Le Sacre du Printemps, genius, madness, ballet, and the women in Paris in their beautiful opera combs who rioted on that famous night. The Joffrey Ballet recreated Nijinsky’s original…

With baroque pearls and natural diamonds, this tiara consists of two branches of flower vine leaves. The tiara probably had additional frames, but they are no longer available. It comes in its original box. c. 1900. It is up for auction at Christies for $37,000.

From her home in Cranston, RI, Ms. Plante creates stunning, unique pieces from silver, amethyst, pearl, brass, and enamel. One of her hair pins includes Capiz shell, which is the outer shell of Placuna placenta, a marine mollusk found in the shallow coastal waters of the Philippines. Every element of her hair combs is hand…

This tortoiseshell mantilla comb made by the Chinese for the Victorian market is huge and in only has one tiny stress mark. The name Spencer is featured in three places, and it dates from 1840. The decoration is a phoenix in a spray of flowers. It sold for $822 on  March 19. You may refer…

Yesterday, I saw a movie, “The Warring States.” It centers around a conflict between two generals who fight against each other for the Wei and Qi states. The other states in this period (475 to 221 BC) were Han, Zhao, Qin, Chu, and Yan. The Qin state won, and the Qin Dynasty lasted from 221…