The Tokugawa Shogunate ruled Japan from 1637 to 1867. They closed the country to foreigners, and Japanese decorative arts remained a mystery to the Western World. Although porcelain continued to be exported, Japan did not come out of seclusion until the Meiji Era began in 1868. In the Paris Exposition of 1872, Western artists first saw early Edo combs. Japonisme began. Here are three early Edo masterpieces Paris artists might have seen. The style and shape of these combs gives the artist a large canvas, on which they paint one idea. 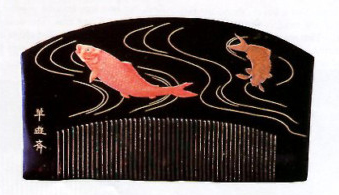 I believe this is a painted tortoiseshell comb of a tree branch extending over a lake. Insects are flying about. Where the artist reveals the tortoiseshell adds shadows to the insects. The fish painted on the tines represent the fish underneath the lake. Look at the shading blend from top to bottom. This is a masterpiece. 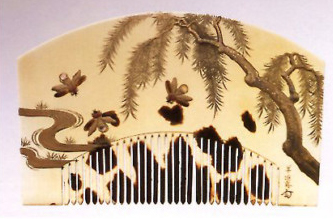 Edo artists painted on glass, too.