Brass- or gold-plated metal kanzashi began to be made in the latter part of the Edo era, when hair styles became more complicated. Hair ornaments revealed a woman’s class, marital status, age, and if she had any children.

A woman could also use her kanzashi as a deadly weapon. Female ninja, or kunoichi, practiced ninjutsu, the martial art of guerrilla warfare. They used their kanzashi to rake the eyes of their victims while escaping. Or, they dipped them in poison to assassinate people. Fending off male attackers was another convenient function.

This gold-plated skull kanzashi subtly illustrates beauty’s deadly side. It currently resides in the Daruma Museum 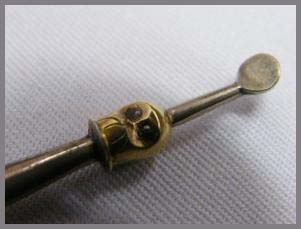 2 thoughts on “Kanzashi as Deadly Weapons”