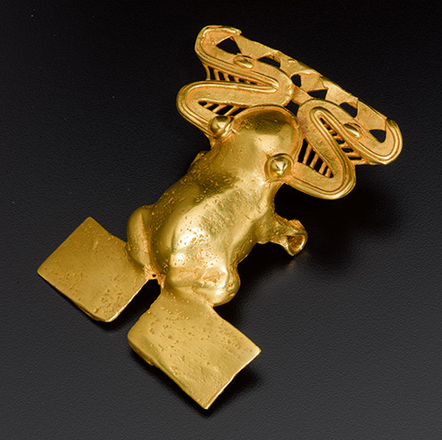 23 April 2015: Art of the Islamic and Indian Worlds: Christie’s, London: An 18th Century Armenian gemset and enamelled reliquary from the Ottoman Empire. “The pendant of ogival (pointed-arch) form with cusped edges, decorated in openwork with a pronounced cross with rosette centre and trefoil edges. On the back are vegetal motifs decorated with Christian imagery in gold reserved against deep blue or green ground.” 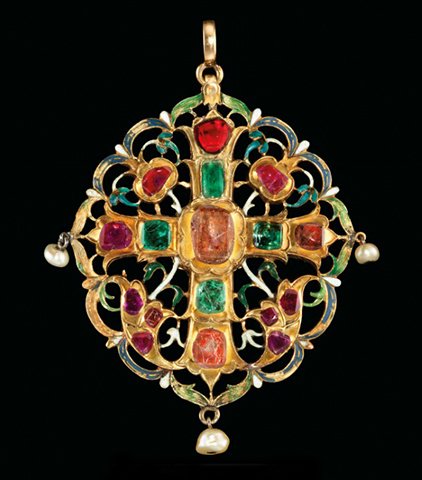 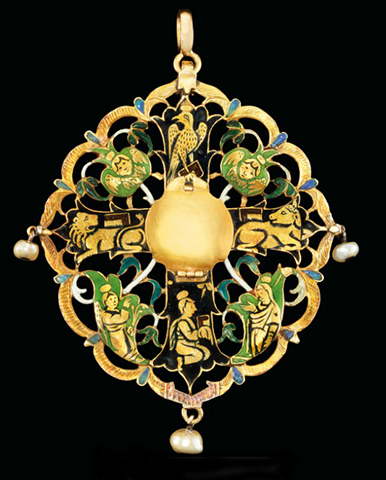 24 April 2015: Art of the Islamic and Indian Worlds: Christie’s, London: A gemset silver-gilt comb from North India, Late 19th- to early 20th Century. “The top openwork and decorated with confronted birds either side of a flower bud, foliage around them, with green, red and colourless gems.” Starting bids: $2000 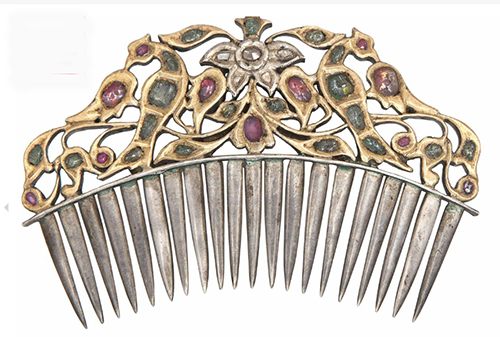 24 April 2015: Art of the Islamic and Indian Worlds: Christie’s, London: Two hardstone and coral-inset pendants, Ottoman Turkey, 18th and 19th Century. “The first of circular form, set with a crescent-shaped green jade panel with silver knotwork with turquoise, red and green hardstones; the second silver-gilt, of palmette form, set with corral cut-in boteh-like and drop shapes, the borders with hanging coral beads, suspension loop on reverse; each on stand.” Starting bids: $2000 to $3000 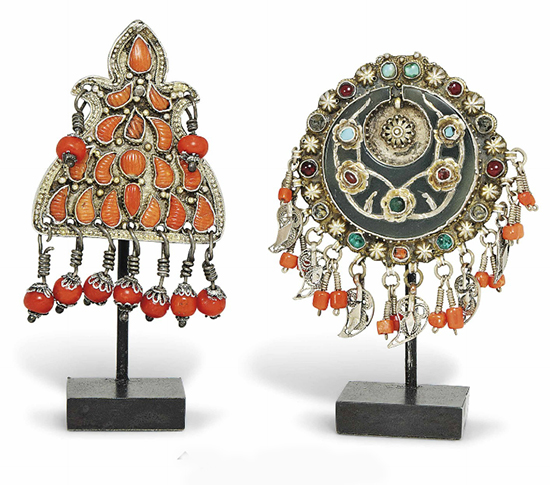 24 April 2015: Art of the Islamic and Indian Worlds: Christie’s, London: A pair of enamelled gold earrings from Qajar Iran, 19th Century. “Each with an upper gadrooned shallow-domed section above a larger well rounded domed element above a lower bell-shaped pendant, the main central element with polychrome enamelled flowering sprays above a band of stylised floral motifs.” Starting bids: $1500 to $2000. 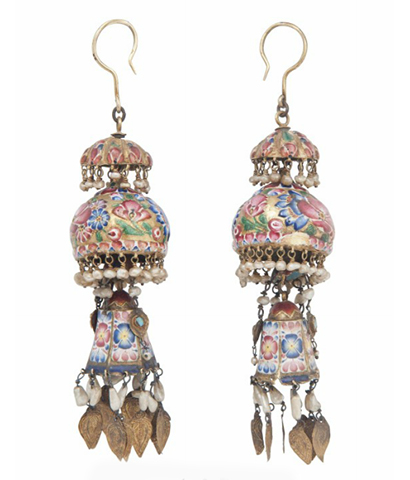 23 April 2015: Art of the Islamic and Indian Worlds: Christie’s, London: A Mughal gemset gold and enamelled turban ornament (sarpech), North India, 19th Century. “Of typical form with a central curved palmette rising from a central rosette, flanked by two smaller rosettes, the gold body is set with diamonds and other gems.” Starting Bids: $12,000 to $18,000. 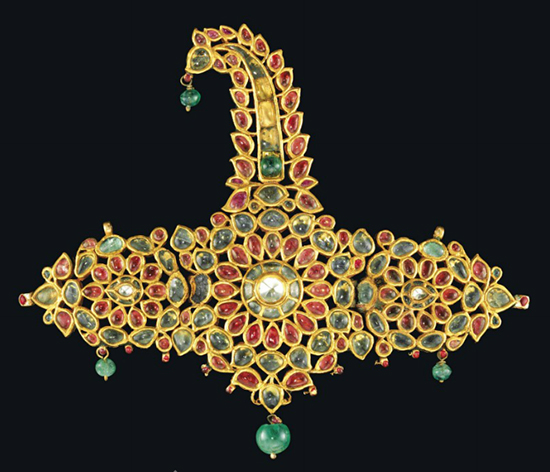 A beautiful Manchu piece sold on July 31 for $421.67. Deep blue kingfisher feathers were offset by coral, pearl, and floral decorations. A pin or chain could be put through the rings on top. Congratulations to the winner. कंघी For more scholarly research, please examine Jewelry and Accessories of the Royal Consorts of Qing Dynasty…

Sotheby’s In September of 2010, jewelry designer Ann Ziff opened her store on Madison Avenue, Tamsen Z. After specializing in barrettes, she started creating jewelry in all forms. On 6 April 2015, the “Renée Fleming Iris” brooch she made will be auctioned at Sotheby’s, with a starting estimate of $80,000 – $96,000. The flower was…

I love what age does to round things. Here are some bracelets up for auction. At Christie’s are “two Jade Bracelets from Southeast China, Neolithic Period (3000 BC): Each a tapering, thick-walled ring, one Liangzhu culture, the stone of yellow and russet-brown color; the other of Liangzhu type, the stone of olive color with opaque…

After the big September 23rd auction, there have been three French combs, c.1790 – 1850, which went for varying prices. The one that sold for $315 was a steal because the photograph did not show its complexity, nor my instinct that there were pearls dangling from the gilt circles decorated with lapis flowers. Here is…

Decay is sensual in itself. The Mediterranean Sea Holly’s cone flower turns brown in the fall, and its silvery blue bracts cannot hold water anymore. In a flower’s life cycle, death comes without tears. With a Japanese inner eye, Lalique must have noticed the sea hollies in a garden one day, as their decaying colors…

Three stunning way-too-expensive pieces are selling on E-bay. They come from different worlds. Looking at them, I feel like I’m in a historical conference in an imaginary United Nations. The first piece is a back comb from the French Empire’s Eugenie period, c. 1860. A blue enameled center sets off two sides of gilt-bronze scrolls,…