For the kanzashi collector, it is helpful to be able to discern between that which is decorative and pieces which are art. Auction prices often confirm the fact that the more art qualities a kanzashi has, the more collectable it becomes. Decorative hair combs (which are often quite beautiful in their own right), will not possess the depth of expression that is seen in more artistic pieces. Art is distinguished by its originality, a sense of aesthetics and clear, purposeful expression. Often, within in it, one feels the presence of the maker – there is the sense that the piece has its own personality.

In the top comb set we see lovely decorative flower design. But on second glance we find a demonic figure hiding in the right side of the stick. The inclusion of ugliness with utmost beauty makes a statement about life that is beyond the decorative –the comb set has now become evocative and more poetic in mood. In the second comb, the artist reaches beyond the decorative in this complex, beautifully executed design. On it are two separate landscapes, each one on golden, smooth lacquer fan shapes. Around these shapes, darker, roughly carved water forms flow. The movement of the water gives a feeling of excitement to the piece, especially when contrasted with the smooth texture of the fan shapes and the serene designs within them. The water even cuts into the fan forms, just as water does in real life, showing that the artist who made this gave a lot of thought to the play between the two opposing elements: surging water and serene landscapes. When an artisan goes the extra mile to create something exceptional, the result is often that ever-elusive thing we call “art.” 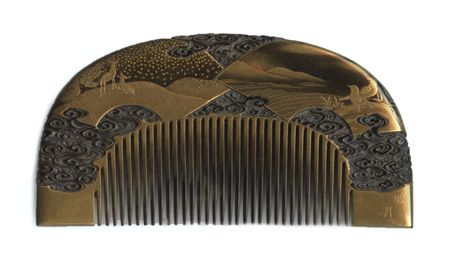 From The Miriam Slater Collection: A silk kanzashi with silver-thread trim adds panache to a bone hair pin. It was made, c. 1900, for a maiko, or apprentice geisha. 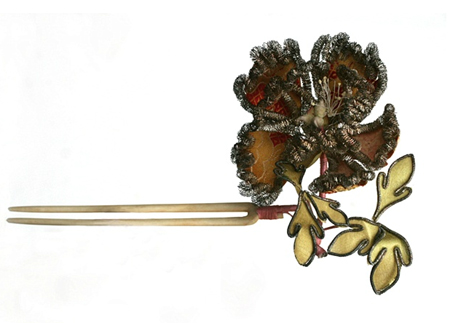 Today, I wanted to celebrate the taste of our author Miriam Slater. Don’t let this piece fool you. “The truth is never pure and rarely simple.” This Meiji kanzashi is a painting within a sculpture.

Within the bird perched on a branch, is the stem and flower of a Japanese hibiscus. Notice the stick painted in beige, as the natural ivory is left alone to show the leaves. Atop the bird is the flower painted in gold with a coral center.

I do not know what to do with myself when I see what artist Miriam Slater has collected. My mind basically goes blank. However, my jaw does recover within the hour. Here are two picks from the tortoiseshell part of her Edo collection. The first wedding set features a tortoise and a crane, symbolizing stability and freedom. The second has the scroll of wisdom. 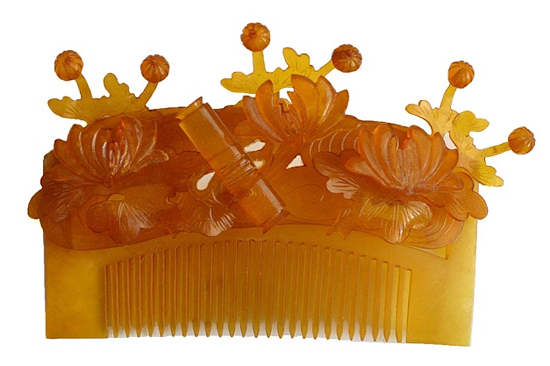 The Japanese over the centuries have distinguished themselves by their cultivation of humor, fine design and poetry within their art. In fact, these qualities are what originally attracted me to kanzashi. As an artist I found myself entranced by the variety of expression within these beautifully crafted pieces.

Metaphors and symbols are commonly seen in Japanese hair ornaments. For example, in the top image, a silver hair ornament depicts a clamshell, a symbol that can also suggest a woman in the Floating World. When opened up, to the viewer’s surprise, in the shell is a small gold crab, pinchers ready!

The second ornament (of a similar theme) features a closed clamshell and a knife used to pry open clams. The clam’s moveable parts will open to reveal the prize within, a pearl. Symbolic objects are frequently seen on kanzashi which enhance the expression and meaning of each piece. The tortoise comb with a fishing rod can be seen as a metaphor for flirting and courtship with its implied hooking and the reeling in of one’s “catch”.

The crow, a common bird that is noisy and known for its bad manners, graces a red lacquer hair comb as an elegant adornment for a woman of position and beauty. The juxtaposition of what is considered ugly played with utmost beauty reflects the poetic side of the Japanese culture. So, to thoroughly enjoy and understand  kanzashi, it really helps to see them not only as finely crafted functional objects, but also as works of art imbued with more subtle meanings.