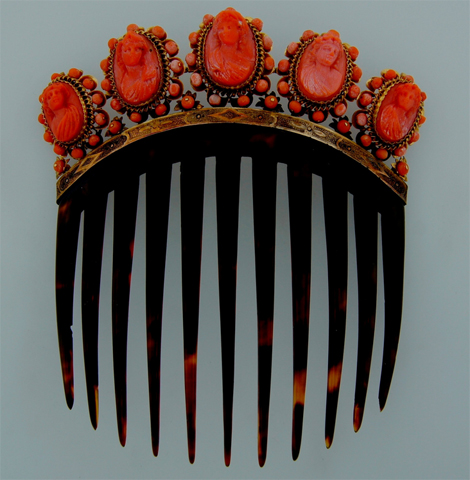 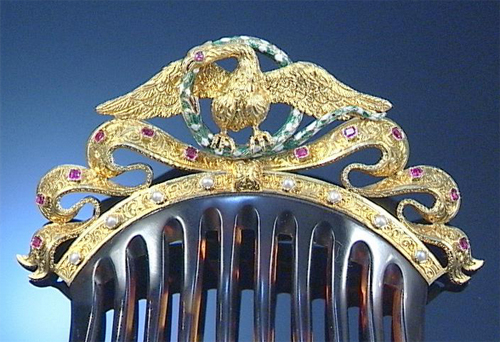 Ebay is Antiques Road Show Live. It can really get ridiculous sometimes, but I know a lot of people who have been watching this auction and wondering what the final price would be. It just sold for $876.98. This is a French Empire Josephine-style comb, c. 1860, with beautiful large brass galleries and blue-and-white glass…… END_OF_DOCUMENT_TOKEN_TO_BE_REPLACED

Many things are Buy It Now’s, where the dealer sets the price. They have the time, so it’s up to the buyer to either pay or negotiate. But here are some beautiful pieces on the market. This Victorian tiara, c. 1860, is selling for $17,500. Diamonds and rubies, set in yellow 14K gold, highlight a…… END_OF_DOCUMENT_TOKEN_TO_BE_REPLACED

Multimedia exhibitions on comb scholarship are the hallmark of the Creative Museum. “The Riches of the French Empire” shows us how fashion expressed the tragedy of revolution, themes of antiquity brought back a refined aesthetic, Napoleon recognized a business opportunity, and how men put women in charge of exhibiting their wealth. The comb was an…… END_OF_DOCUMENT_TOKEN_TO_BE_REPLACED

After the big September 23rd auction, there have been three French combs, c.1790 – 1850, which went for varying prices. The one that sold for $315 was a steal because the photograph did not show its complexity, nor my instinct that there were pearls dangling from the gilt circles decorated with lapis flowers. Here is…… END_OF_DOCUMENT_TOKEN_TO_BE_REPLACED

The stones were amethysts. Shall we compare the comb in this Empire parure on a historical jewelry site to the one that went for $458 in that E-bay auction? The comb correctly identified. The amethyst Empire comb that went for $458 on Ebay. कंघी For more scholarly research, please examine Tiara by Diana Scarisbrick Napoleon’s…… END_OF_DOCUMENT_TOKEN_TO_BE_REPLACED

I guess we’re going through an Empire comb phase. ;-) An Empire tiara top, hinged to either a shell or celluloid comb, is being auctioned on E-bay for 185 GBP at the moment. Does anyone think it looks like a married piece? The tiara is gorgeous. I see the 4 bidders on the board. They…… END_OF_DOCUMENT_TOKEN_TO_BE_REPLACED

695 Euros and 5 days to go. 12 bidders. This is an Empire comb with 9 glass pearl beads atop a silver gilt tiara with flowers. The flowers have blue enamel centers and real-pearl petals. It has a rooster hallmark, and was made in Paris, c. 1798 – 1809. Provenance: “Yves Markezana – Taps French…… END_OF_DOCUMENT_TOKEN_TO_BE_REPLACED