On September 15, 2009, a comb from the Ivory Coast made from Hippopotamus bone sold for $1200 at Sotheby’s. It featured a bird on top of a woman’s head, a symbol of fertility. 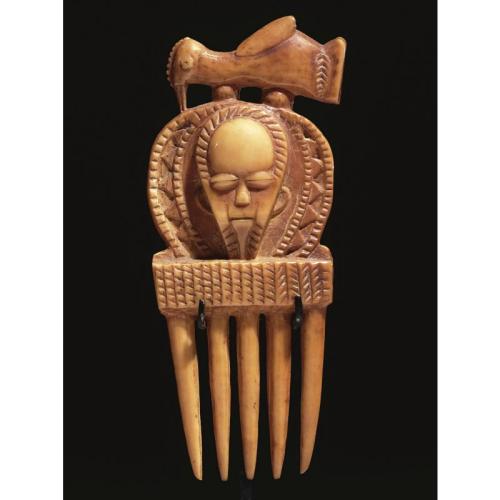 Last Friday, May 13, another comb of the same design and material sold for $4062.

Sotheby’s also tried to sell this comb with an estimated price in the thousands, however, it did not sell.

The Creative Museum has a similar comb in perfect condition. 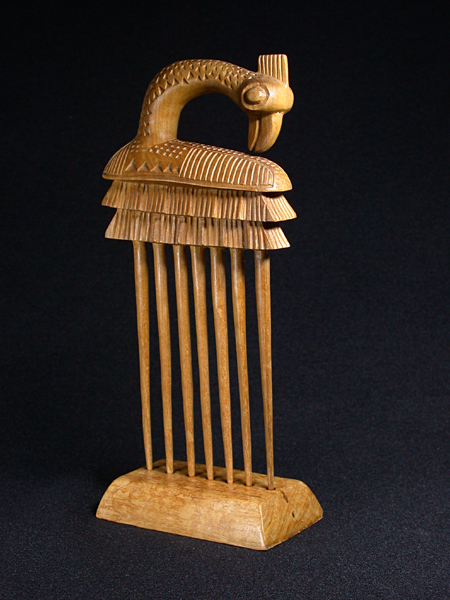 My server is up and running again. I’m so happy! Thank you brother Josh!!!!! We have a new author. Announcement tomorrow. Here is a beautiful Ashanti comb from the Lazar collection, which was on display at the Oceanside Museum of Art. African intellectual history came alive when sculptors placed figures on top of hair combs. These ideas are beautifully shown in Facing Me, Facing You, a video narrated by the Creative Museum. 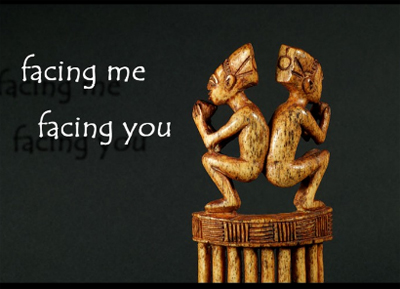 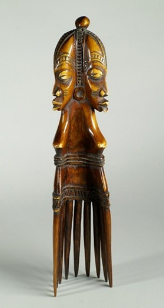 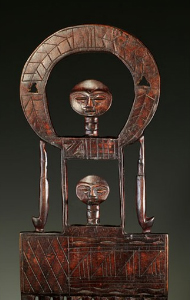 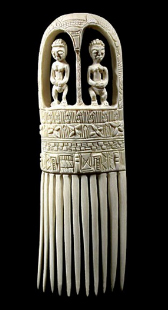 A friend pointed this out to me from E-Bay France. It is a masterpiece, and the way-too-expensive 850-euro price tag reflects it. There were only three copies made in the Nefertiti Gallery, located in the Dakar Region of Senegal. One is owned by the President; the second was offered to the wife of a European head of state; and the third, which is for sale, belongs to the gallery owner. Each comb was hand made by the Nefertiti Gallery’s jewelers. 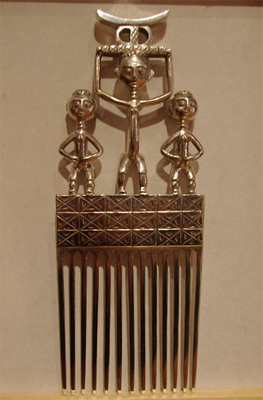 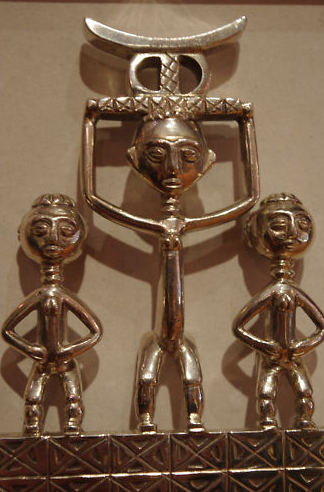 Catherine Olliveaud and Alain Touzinaud, whose inspiring collection is featured in The Creative Museum have acquired some notable pieces of African art, which has a rich tradition of anthropomorphism, or carving emotions into animals, which display a profound understanding of the human condition.

From the Akan people of Ghana, this painted wood comb portrays the “Sankofa bird and means “go back and fetch it”. It is a traditional Akan symbol as is the Sankofa heart.” This knowledge was contributed by our member, Robert Belcher. Thank you, Robert!

This comb reminds me of Edvard Munch’s “The Scream,” but it is decorated with a traditional diagonal mask from the Lwimbi people of Angola.

This comb reminds me of Magritte, but it is a symbol of feminine power made by the Dan people of the Ivory Coast.

The Yaouré people of the Ivory Coast elongated the neck and beak of this bird so it would hold a comb on top of a mask. This technique of exaggerating animal features was famously used by Lalique when he interpreted Japanese combs through the lens of French Symbolist philosophy. I love the fact that skewed features were used in Africa independently of European Western thought.

This is another superb piece of ivory carving by the Yaouré people of the Ivory Coast. It has been dyed with palm oil. 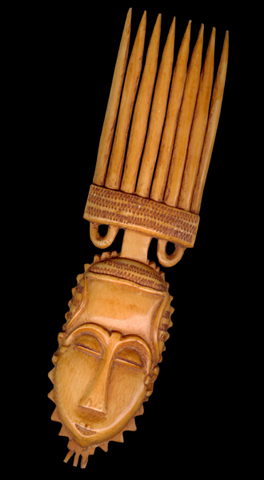 Our last comb is ivory in remarkable condition, and comes from the Akan people of Ghana. It portrays two ancestors standing in arches carved with intricate sacrificial decoration.

There is a book called, “Powerful Headdresses: Africa and Asia,” which documents the collection of Mrs. Myrna Brind, the wife of Philadelphia philanthropist, Ira Brind. On the cover is a chief’s crown of the Dogon People, who live in the central plateau region of Mali. The bird atop this bronze crown represents ancestors. 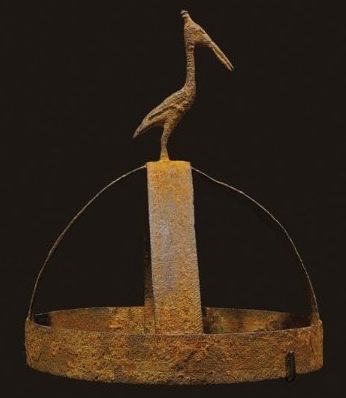 However, alain-t, whose meticulous taste in collecting I know well from E-bay, gave a gift to the hair-comb world with this Creative Museum. It has a Dogon crown, which is much more complex and stunning. To me, it looks like the chief on top is crying as he remembers his ancestors, who are sculpted beautifully in brass below. This crown is a story. Well done, alain. 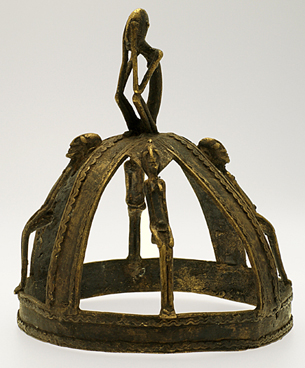 Art Nouveau’s dedication to the natural world ignited European artists from 1890 – 1905. However, brilliant design has many faces, among them fashion still worn today. In the book, Natural Fashion: Tribal Decoration from Africa, author Hans Sylvester reveals a fashion revolution in design thinking: Art Nouveau and Art Deco meld into a single concept as plants and bold natural colors decorate the body and face. John Paul Gaultier, take notice. What the Surma and Mursi tribes of East Africa’s Omo Valley have created is worthy of the most elite haute couture runways. 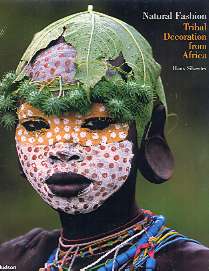 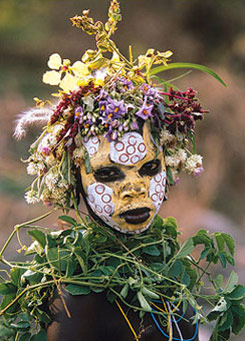 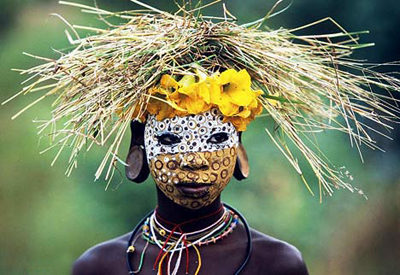 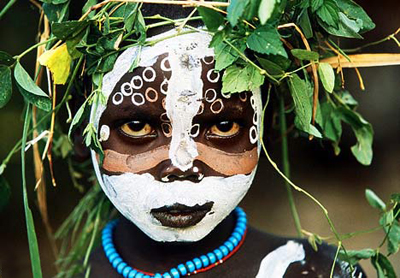 The illegal e-waste trade is thriving in Accra, Ghana. Young men burn old computers to extract and sell the copper. Photographer Quedraogo, a finalist in the Prix Pictet Competition, shows “The Hell of Copper.” A young man balances a crown of copper cables. 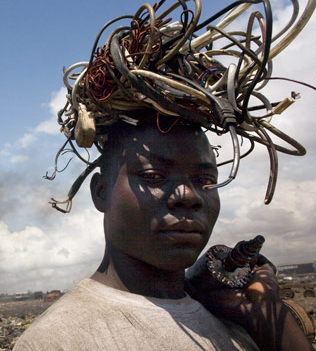 There is a completeness to this 2500-comb collection, as it spans the whole world and time. Most individual collections specialize. This museum brings together the love of many in a dazzling display of hair comb art. The pictures are a community unto themselves.

The museum founders state, “There is nowhere you can see this collection, since it is private. As the owners want to share its resources with everyone, CREATIVE MUSEUM will do its best to offer all the services you could find in a museum: a temporary exhibition with a special theme, a view of the permanent collection, background information and more: expertise.”

Here are a few comparisons and pictures. From the museum: 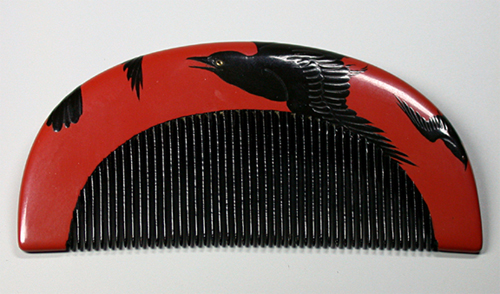 I believe this is my picture of the same comb in 2004. 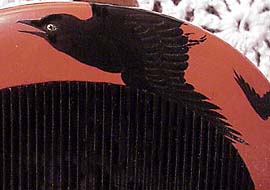 Here is a Manchurian hairpin from the collection. 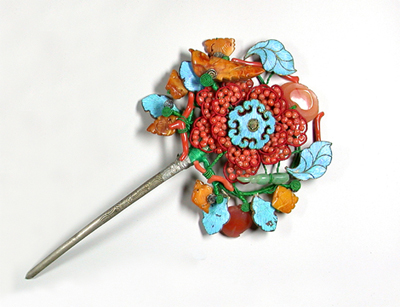 This is my Manchu piece. 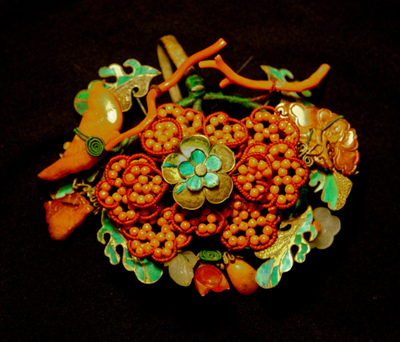 And here are just three pictures, which reveal the eye of the collective mastery that brings this project to life. The still-life photography is superb. 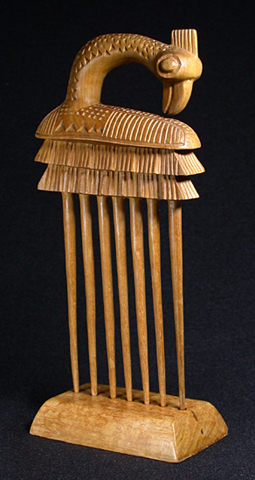 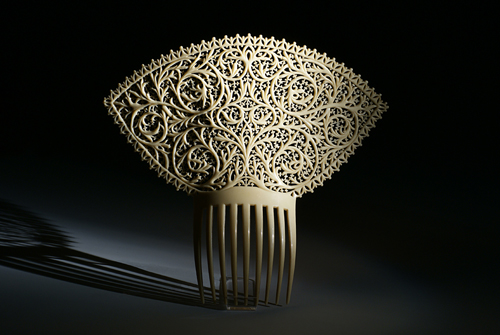 This comb comes from the Solomon Islands of Australia. Its curve was made by a flattened hand. Twenty-five dark-brown tapered wooden prongs form the teeth. The top is held together with thin strings of woven plant fiber, creating compatible red and yellow geometric patterns. There are no religions or hierarchies in this piece.

Great artists make things from what they see in their world. You can look at a comb and understand what kinds of lives they lived. 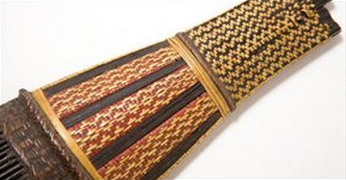